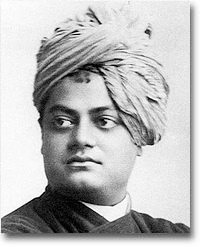 According to Belur Math, Swami Vivekanada’s “speeches at the World’s Parliament of Religions held in September 1893 made him famous as an ‘orator by divine right’ and as a ‘Messenger of Indian wisdom to the Western world’. After the Parliament, Swamiji spent nearly three and a half years spreading Vedanta as lived and taught by Sri Ramakrishna, mostly in the eastern parts of USA and also in London.”

The following account, from Readings of the Vedantasara, by Swami Yatiswarananda, occurred while a young Narendra was having a discussion with a friend about Sri Ramakrishna’s teachings:

One day Sri Ramakrishna tried to bring home to Narendra the identity of the individual soul with Brahman, but without success.  Narendra left the room and, going to Pratap Chandra Hazra, said, “How can this be?  This jug is God, this cup is God and we too are God:  Nothing can be more preposterous!”  Sri Ramakrishna, who was in the room in a state of semi-consciousness, hearing Narendra’s laughter came out with his cloth under his arm like a child.  “Hallo!  What are you talking about?”, Ramakrishna said, smiling.  Ramakrishna touched Narendra, who then plunged into samadhi.  Narendra described the effect of the touch as follows (from The Life of Swami Vivekanada by His Eastern and Western Disciples):

“The magic touch of the Master, that day immediately brought a wonderful change over my mind. I was stupefied to find that really there was nothing in the universe but God!  I saw it quite clearly but kept silent, to see if the idea would last.  But the impression did not abate in the course of the day.  I returned home, but there too, everything I saw appeared to be Brahman.

I sat down to take my meal, but found that everything,—the food, the plate, the person who served, and even myself—was nothing but THAT.  I ate a morsel or two and sat still.  I was startled by my mother’s words, ‘Why do you sit still? Finish your meal!’—and began to eat again.  But all the while, whether eating or lying down, or going to college, I had the same experience and felt myself always in a sort of comatose state.

While in the streets, I noticed cabs plying, but I did not feel inclined to move out of the way.  I felt that the cabs and myself were of one stuff.  There was no sensation in my limbs, which I thought were getting paralysed.  I did not relish eating and felt as if somebody else were eating.  Sometimes I lay down during the meal and after a few minutes got up and again began to eat.  The result would be that on some days I would take too much, but it did no harm.

My mother became alarmed and said that there must be something wrong with me.  She was afraid that I might not live long.  When the above state altered a little, the world began to appear to me as a dream.  While walking in Cornwallis Square, I would strike my head against the iron railings to see if they were real or only a dream.  This state of things continued for some days.

When I became normal again, I realized that I must have had a glimpse of the Advaita [i.e., non-dual] state.  Then it struck me that the words of the scriptures were not false. Thenceforth I could not deny the conclusions of the Advaita philosophy.”

The following video about The Tree of Jiva and Atman, which appears in the Vedic scriptures, provides a brief sample of Swami Vivekanda’s teachings: