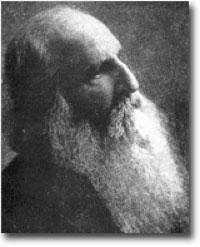 Richard Maurice Bucke (1837 – 1902) was a prominent Canadian psychiatrist in the late 19th century.  Born in Methwold, England, Bucke and his family emigrated to Canada when he was one, and the family settled near London, Ontario. Bucke was an adventurous young man, and, in the winter of 1857–1858, he nearly froze to death in the mountains of California; he was the only survivor of a silver-mining group of which he was a member. Bucke was forced to traverse the mountains and suffered severe frostbite as a result—a foot and several of his toes were amputated. He would wear a prosthetic device for the rest of his life.

After this incident, Bucke returned to Canada, eventually studying medicine at McGill University in Montreal. Bucke became a psychiatrist, and, ultimately, the head of the provincial Asylum for the Insane in London, Ontario. Bucke authored three books: Man’s Moral Nature, Walt Whitman, and Cosmic Consciousness, a study of mystical experience, which is his best-known work.

Bucke describes his own mystical experience as follows:

“It was in the early spring, at the beginning of his thirty-sixth year. He and two friends had spent the evening reading Wordsworth, Shelley, Keats, Browning, and especially Whitman. They parted at midnight, and he had a long drive in a hansom (it was in an English city). His mind, deeply under the influence of the ideas, images and emotions called up by the reading and talk of the evening, was calm and peaceful. He was in a state of quiet, almost passive enjoyment. All at once, without warning of any kind, he found himself wrapped around as it were by a flame-colored cloud. For an instant he thought of fire, some sudden conflagration in the great city; the next, he knew that the light was within himself. Directly afterwards came upon him a sense of exultation, of immense joyousness accompanied or immediately followed by an intellectual illumination quite impossible to describe. Into his brain streamed one momentary lightning-flash of the Brahmic Splendor which has ever since lightened his life; upon his heart fell one drop of Brahmic Bliss, leaving thenceforward for always an aftertaste of heaven. Among other things he did not come to believe, he saw and knew that the Cosmos is not dead matter but a living Presence, that the soul of man is immortal, that the universe is so built and ordered that without any peradventure all things work together for the good of each and all, that the foundation principle of the world is what we call love and that the happiness of every one is in the long run absolutely certain. He claims that he learned more within the few seconds during which the illumination lasted than in previous months or even years of study, and that he learned much that no study could ever have taught. The illumination itself continued not more than a few moments, but its effects proved ineffaceable; it was impossible for him ever to forget what he at that time saw and knew; neither did he, or could he, ever doubt the truth of what was then presented to his mind.”